Pay with the world’s most
payment methods.

HUANUO HNDS5B premium gas spring dual monitor stand which fits most LCD LED monitors 17 inches to 32 inches in size and supports up to 17.6 lbs per each monitor. Its made from high quality polished aluminum die-cast solid steel for durability, enhancing your healthy lifestyle and improves productivity in both home and offices.

I like the stand it really gave me more space on my desk to put other stuff. The reason for the 4 star review is the cable holder doesn’t hide the cables like they should or they are stretched out too far apart. The better thing to do is to have cable holders going down on the arms themselves and then lead to the actual stand. Also, I had the hardest time figuring out how to set both monitors up so they are side by side. I have a msi 27” and a Asus rog 31.5” curved monitors. I assembled it exactly how the instructions told me (which was very easy btw), but they were still to far apart or if I moved them closer they would be hitting each other in the middle of the screens. After legitimately a couple of hours playing around with it, I took off one of the arms and boom they are next to each other. Everything was easy to setup, instructions were super detailed, definitely love the space and the way it looks in my “office” now.

Liking the build and arm strength is great you can adjust the tension at anytime. i have mine on a 1/4" thick tempered glass desk 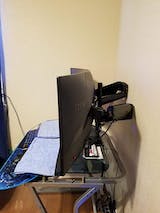 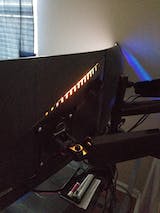 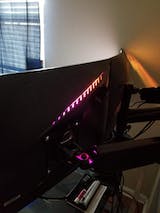 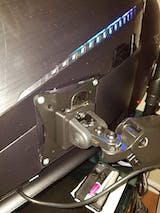 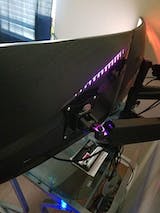 K
K.W.
Double check spacing for lip on back of desk.

Replaced my 2 monitor stand with this clamp style one. One oversight was that I didn't consider was the depth that the lip of the desk needs to be for the clamp to securely attach to the edge of the desk. I went with the 2nd mounting option by drilling a hole through my desk and doing the grommet mount through the desk. Very sturdy, lots of range of motion and they are easy enough to move without sagging or tilting after I have them where I want.

So far this has been great. It's kept my monitors (Samsung 23.5inch curved display) mounted with out any movement. The overall look and feel is impeccable and it is exactly what I needed for my office.

A
A.C.
Overall a functional and worthwhile purchase

Gas spring is very easy to operate. You just need to adjust to proper tightness according to the actual weight of your monitors. If too loose while the monitor too heavy, you cannot raise the arm. It is worth to note that the two arms are placed one on top of the other, which saves some desktop area but make the product not so symmetrical.It will take you a while to figure out the tightness but from then on, everything is very straightforward. you could insert all cords into brackets attached to the arm, and all hdmi/power cords are well organized. Ovreall, there is no issue after using the product for a month.